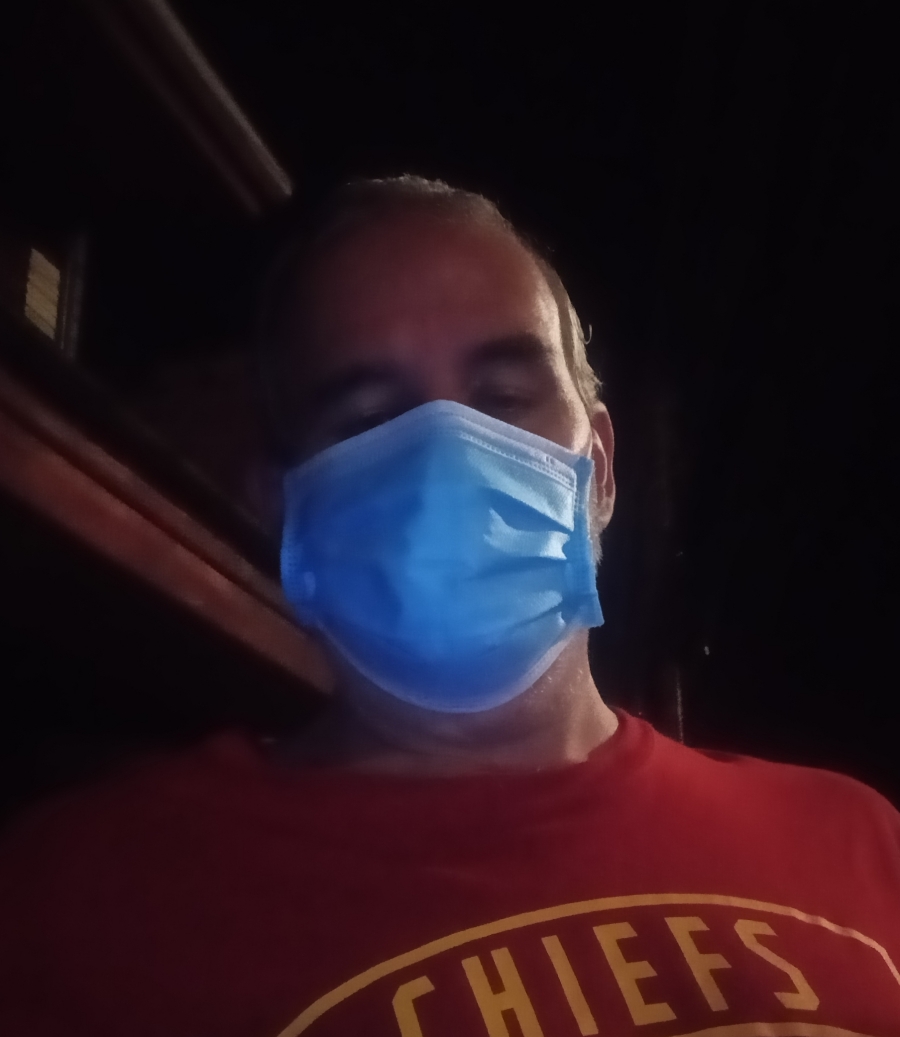 Since I copped-out on last month’s “Not An Update”, I feel a bit of an obligation to bring my few readers up-to-date on my activities during a month in which I never went anywhere at all.  In many ways, April 2020 has seemed like the longest month ever.  The upcoming month of May will be much the same as our government has extended the so-called Emergency Decree until the 31st. There is a possibility that extension may be extended as well.

But the end of this month is much different than the last week of last month and the initial days of April.  The prime minister of Thailand set the Emergency Decree to cover the entire Kingdom but each provincial governor could set their own parameters as well which were often contradictory and confusing.

It seemed like the governor of Phuket, a place I have called home for 15 years, was hell-bent on making the most restrictive environment he could.  His former career as a prison warden certainly was evident for he did not let a single day go by until mid-April without making a slew of new orders to rule our lives.  First, the borders were sealed to land and sea traffic.  The airport was shut down a week later.  Beaches were closed.  Basically anywhere a person could think of wanting to go outside his or her own home was put off-limits at various times.  Some exceptions were made.  Then each of the 17 separate sub-districts put up barricades to prevent traffic from moving between each municipality.  That created havoc as many could not even venture to 7-11 to pick up a microwaved bowl of rice or restock their bottled water.

Thank goodness for delivery!  But that was also hit or miss as certain organizations’ drivers got themselves banned from crossing sub-districts for various reasons.  Two employees from one service got caught transporting drugs which almost shut down delivery services altogether.

All of this was in addition to the “usual” caveats which were suddenly made enforceable laws: must wear a mask outside (big fines), must not go outside during curfew hours (bigger fines), etc., etc. No different, really, from most people no matter their location on the planet Earth at this point of time.  Perhaps your local government was a bit lighter-handed in their issuing of restrictions (or, recommendations, as the case may be).  The number of new notices made each day for a couple of weeks made it rather stressful.  I just wanted to be left alone in my home, ready to ride out the storm.

Every new order from the provincial governor caused a flurry of activity as my colleagues from work would text me asking what the latest item meant and did that mean yesterday’s announcements were no longer valid.  This would often come at times when I was trying to read or watch a movie or blog about stamps.  I could not rest as I needed to prepare to help the other teachers understand what they needed to do and try to calm them down.

There for a while, I even had to make sure I was completely dressed at any time of the day or night with my face mask ready to put on before answering the door as government officials, police officers, immigration agents, and medical personnel all made their rounds to perform “check-ups” of various kinds.

The first time this happened to me was at 10:30 pm on a Friday night!  I was already asleep when the pounding on my door began.  I kept yelling “Just a moment” but the knocking continued unabated while I searched around for my shirt and pants.  When I opened the door, I had failed to put on my face mask and got a stern warning from the local government official who was in the hallway.  He gave me a form to fill out that was completely in Thai.  I couldn’t read any of the three pages and tried to ask for help.  He moved to the next door.  I later learned it was to register for a one-time free food offer (which I finally received more than a week later — a big bag of rice, 10 cans of sardines in chili sauce, 15 bottles of water, some cooking oil, a bottle of fish sauce, 10 packets of noodle mix, and a tiny bag of sugar).

Other knocks upon my door came from a duo in full hazardous materials protective gear who took my temperature and gave me a boxed lunch of fried rice with chicken, an official from Immigration checking that I had done my 90-days report (found out how to do it online and then they gave a visa amnesty until 31 July), two police officers who checked my passport and wrote my name down on a slip of paper,and  my landlord to tell me that my free food had arrived and I needed to go downstairs.  The last time, I ran down the four flights of stairs but hadn’t taken my passport (not psychic) so I had to run back up to retrieve it and descend again.  They then took my temperature.  Naturally, it was too warm and they began telling me I had to go to the Quarantine Hotel which costs 1,000 baht per day (by comparison, my rent is 3,000 baht per month).  Luckily, my landlord pointed out the weather was hot and asked them to let me cool down for a minute.  She brought me some ice water and when they took my temperature again it was within the “safe zone”.  Whew!

Thankfully, the mayhem largely subsided by the week of the Thai New Year (Songkran) mid-month and I could concentrate on daily new stamp issue updates to Philatelic Pursuits, reading books and stamp journals, and occasionally watching downloaded TV shows or movies.  I always tried to clear everything on Thursdays as that was when I would watch “Survivor” and a few other favorite series.  I’d never seen “The Sopranos” and downloaded Season 01 early in the month but, apart from the first episode, I haven’t watched any others.  I just haven’t been in a mood for mobster dramas.  I did binge-watch the entire third season of “Young Sheldon” one weekend.

I mentioned food delivery earlier. I have yet to order any meal deliveries (not even from my usual suspects of Pizza Company and KFC).  But I have ordered groceries from Tesco-Lotus twice now.  I love their app; they offer a lot of stuff and it’s not only food.  But they were out-of-stock of around half of my order both times.  The second time, they made some rather odd substitutions rather than just not charging me. FYI, cream of corn has no place inside an egg tart (especially when not advertised as such; I have no problem with either separately but the flavors DO NOT blend). I tried for A&W root beer and ice cream.  The soda was delivered the first week but not the ice cream; neither arrived the second time I ordered.

About two weeks ago, I was contacted by the agency I work for about teaching a student of mine online. I had started a TOEFL exam preparation course with him in February and we still have quite a bit of time left on the contract.  What was originally supposed to be two hours per night five nights a week has become two hours for two nights per week.  Well, afternoon and early evening.  We begin just as the setting sun is shining through my western-facing windows and end in near-total darkness as the main ceiling light in my studio apartment burned out early in the lockdown and maintenance is MIA.  My main argument to online teaching in the past was that my Internet connection at home was too slow for it to be reliable. My reasoning has proved sound as we experience lengthy connection issues at least once per session. We have come to expect some snafus and each lesson improves on the one before. The online platform is not an ideal way to teach such a course anyway but I have adapted to fit the format.

I suppose that is really all there is to report (and I did it in many more words than I’d anticipated!).  I do have a few useless statistics to share as I always do…

I actually blogged LESS than in March (when I published 153 articles to Philatelic Pursuits alone).  While I might put together one or two more articles in the hours before the new month begins, at the time of writing I have logged 119 posts to Philatelic Pursuits and one each to my other three blogs (including the article you are reading now). I had planned to write a few more for the postcard blog and at least one ASAD article got sidelined by preparation for my online course, but it shows that I certainly was anything but lazy during April. I would like to relax a bit more in May as New Issue announcements are not coming in as fast and furious as during the first three-and-a-half months of the year and I am slowly catching up.

Earlier today, I finished reading my fifth book of April. The last time I finished five in a month was last December.  According to the really wonderful Read More app, I read 3229 pages in 53 hours (an average of one hour and 46 minutes per day).  I met my daily page goal every day in April but I read for less than 30 minutes (time goal) on three occasions.

For music, I listened to 674 songs during the month (up slightly from 634 in March) from 76 different albums.  I haven’t been in the mood for a lot of my regular rock & roll, usually opting for something a bit quieter; Gillian Welsh and Emmylou Harris were highlights and you can never go wrong with Steely Dan (or Donald Fagan’s solo material). I spent a few days on a John Prine marathon following his awful death at the beginning of the month from the Coronavirus. Towards the end of the month, I ventured into harder territory listening to the first Runaways album which led me to play a bunch of Joan Jett & The Blackhearts. I got lazy so just remained in the J’s with run-throughs of Jethro Tull and Journey a couple of nights ago.  First time in a long while for the latter. Local heroes (from Kansas City) The Rainmakers and Nebraska’s own The Millions received some airplay for the first time in a great many months. Still no Springsteen?  Maybe I will remedy that in May.

Well, let’s hope that this coming month is a bit calmer. The restrictions remain in place and most people (myself definitely NOT included) seem overly worried about when they will be able to buy alcohol, go to the beach or get their hair cut.  I am saving loads of money by not having to take public transportation to and from work each day (and then shopping for food in a shopping center which exists solely to milk tourists dry of their cash). My tiny apartment may not have air-conditioning, a refrigerator or a stove but it is clean and organized and I have no need to go out into the hot sun and bake.  I stay relatively cool inside (occasional warm evenings aside) and rainy season is fast approaching.  We have had a few stray thunderstorms lately and they really cool things down.