Finally, we seem to be past the huge number of holidays and other activities that served as disruptions in the school schedule, starting in early December with Thai National Day and Constitution Day, continuing through Christmas and New Year’s celebrations, Mid-Term exams, and culminating with Thai Children’s Day and National Teacher’s Day nearly two weeks ago. I believe last week was the first in more than a month and a half where I worked a full week. My students were quite attentive and productive during most of the week so I rewarded both high school classes with a rare “Games Day” on Friday which was as much fun for their teacher as for them. It was a very long week, indeed.

I have pretty much settled into a routine. During the weekdays, my first class is never earlier than 10:20 a.m. so I sleep a bit later than usual — getting out of bed and firing up the computer around 7:30 or eight o’clock. During that pre-class time, I usually work on one of my projects or begin preparing for a blog entry. For A Stamp A Day, that often means searching Wikipedia’s Days Category for an event that I can match a stamp with. Lately, I have been working hard on my Philatelic Pursuits blog, trying to track down the first stamps of 2019 issued throughout the world. Some countries are better at reporting their upcoming releases than others and it can be a struggle to find good-quality images. I’ve now redesigned all of my blogs (the fourth being Postcards to Phuket) except for ASAD.

Around 9:30, I walk to my school which takes just under 20 minutes through a very scenic part of town. I’m usually finished there by two p.m. and either walk back home (often stopping at a local restaurant along the way) or head to my agency in the basement of the large Central Festival shopping mall in the center of the island. My afternoon or early evening may be taken up by more writing or some reading (accompanied usually by music) and then a trip to a local market or a restaurant for dinner, leaving my phone at home as I don’t like to be interrupted while eating (and explaining why there are very few photos of food in these wrap-up articles). Back in my apartment following my meal, I usually plan my next day’s lessons and either read my book or surf the Internet. I try to be in bed no later than midnight. For the most part, this constitutes my weekday routine. The weekends aren’t much different.

After I finished my blogging for the day last Sunday, I headed to the weekly Lard Yai in Phuket Old Town. Late every Sunday afternoon for the past five years or so, Thalang Road through the heart of the historic district is blocked-off to vehicular traffic and local vendors set up stalls to sell all manner of street food, beverages, local handicrafts, and much more. There are at least four artists and photographers selling their work on postcards. You can also have your portrait painted, your hair cut, and listen to some local musicians. By seven in the evening, the entire road is jam-packed with more foreigners stumbling across it every week. I actually told a Russian man last week to put out his cigarette; he was puffing away while leaning on a large sign declaring that smoking and drinking alcohol are forbidden. Very soon, the national law against smoking anywhere outside and in public establishments will go into effect (I believe it starts on February 1).

I bought a few postcards while on the street (for my first Postcrossing addressees since September 2017) and my favorite street snack of boiled pork dumplings with spicy sauce and garlic peanuts sprinkled on top. They call this dim sum moo and it’s only 40 baht (about 12 U.S. cents) for a bowl full of the piping hot treat. I usually carry it about half the length of the street before risking a taste as I’ve burnt my tongue on more than one occasion!  Once I finish my dumplings, I head for a stall in the middle of the street called Yim Yam where they make icy shakes using flavored milk. I invariably get the cantaloupe flavor but every time I promise myself that I will try the Oreo or strawberry the following Sunday. I never do,

I was up at the crack of dawn Monday morning to listen to the AFC Championship Game between the Kansas City Chiefs and the New England Patriots. The first half was pretty rough for my Chiefs and the game went so long that I had to get ready for work during the fourth quarter. I was walking to school (still listening to the radio app on my phone) when Kansas City took the lead late in the game and was standing outside of my office when the Patriots tied it up with eight seconds to go. It went into overtime and then I had to head for my lesson. I had just arrived outside of the classroom when New England got their touchdown and won the game.  Needless to say, I was disappointed but still very proud of my team for making it so far. It was a truly magical season and we broke a lot of long-standing records, not only for the franchise but for the entire history of professional football in the United States. If they can maintain that momentum and inspiration next season, I have no doubt that one year in the near future we will make it all the way to the Super Bowl.

The remainder of the week was much subdued in comparison. I had two evening lessons scheduled at my agency but the student cancelled both times after I’d already traveled to work. My weekly Saturday morning student is on hiatus from her lessons until March. Thus, I spent a rare Saturday at home working on a number of projects. I didn’t leave at all, not even to go eat. Today, I am hustling to finish this weekly wrap-up article and one for A Stamp A Day (Mozart’s birthday) before going out to a “nice”afternoon meal.

Also this week, I finished my second book of the year (The Associate by John Grisham) and have made good progress on another, Lee Child’s Worth Dying For. I listened to a fair amount of music along the way including a few more concerts from Bruce Springsteen’s 2016-2017 The River Tour, a couple of 80’s albums by Simple Minds and Elton John that I remembered liking back then but which sound extremely dated now, as well as my copy of last year’s 50 Years: Don’t Stop boxed set by Fleetwood Mac. Oddly, it’s a different running order than I’ve seen listed online and it doesn’t include the single version of “Fireflies” so I can’t (yet) replace my old poppy vinyl dub (that and “Cool Water” — the B-side to 1982’s “Gypsy” single — are my only analog holdouts from my first favorite band).

It was a very hot week without even a hint of rain. Late January through February is usually the hottest time of the year in Phuket but we do occasionally get some rain during this period. Some of the evenings have been nicely breezy and I noticed that the moon was particularly huge and orange during my motorbike ride home Tuesday night. I forgot to go back out with my camera, however. 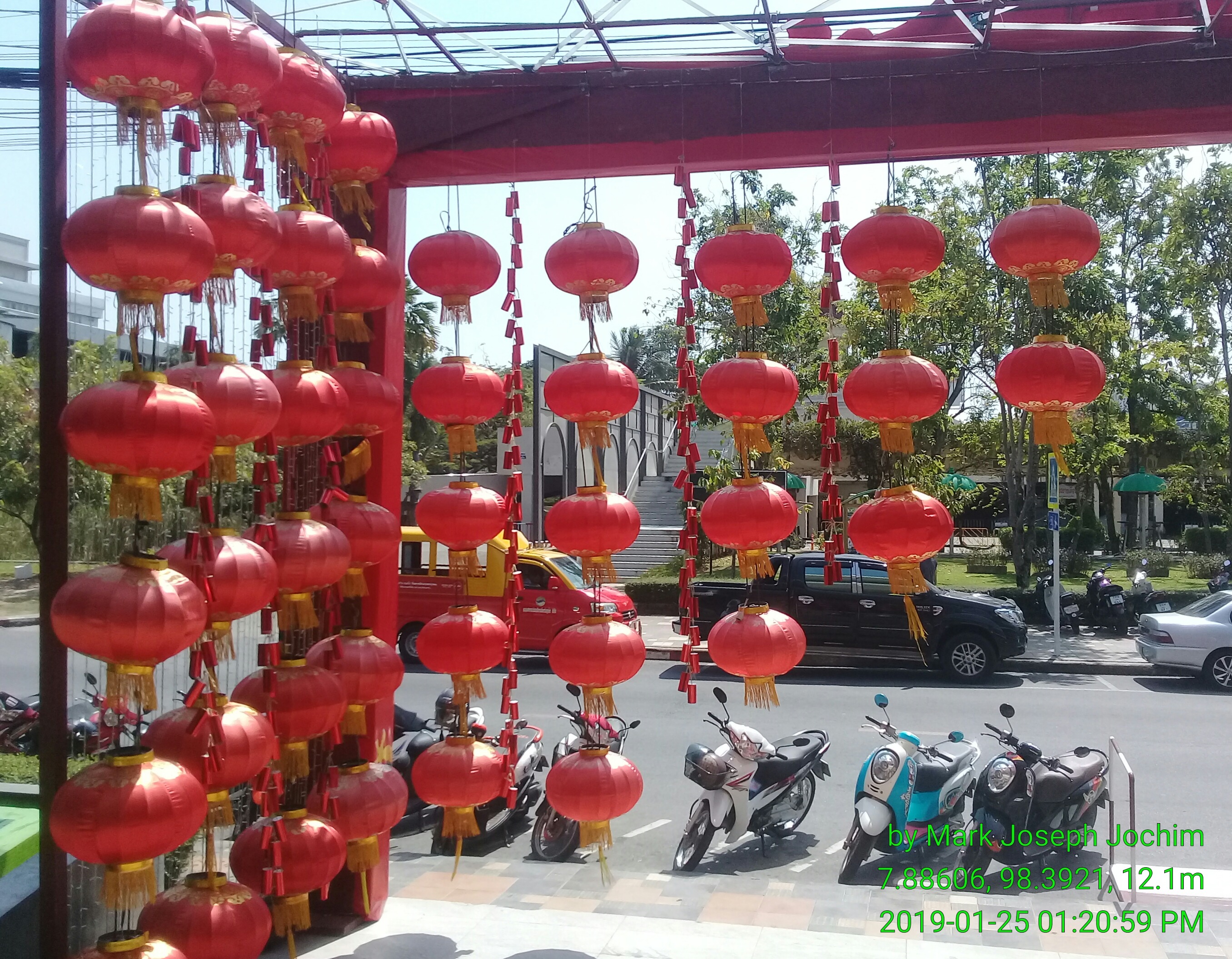 The local municipality has decorated most of the streets around town with lanterns and dragons for the forthcoming Chinese New Year, still some two weeks away (and likely the cause of more school cancellations). My home is very close to several Chinese clan shrines (in addition to two large Buddhist wats, and temples for local Sikhs and Hindus) so large strings of very loud fireworks are exploded at all times of the night and day once the festival is in full swing. When the fireworks begin going off while I’m working inside, my heart goes into convulsions and I can’t hear anything for several minutes until the explosions subside. These are usually followed by another clan setting off their own batch or by the dogs barking for minutes on end. I actually prefer the fireworks to the dogs. For the first several days of Chinese New Year, the series of booms go off about every hour starting around one o’clock in the morning and continue until five or six a.m.

Immediately following the Chinese New Year festivities, the community holds the Phuket Old Town Festival which is my favorite annual celebration. It is centered on Thalang Road and spreads outward throughout the historic center of town for three days of food, music, dancing, and more. I think it coincides with Valentine’s Day this year. I didn’t take enough photos this week for a video slideshow but I will take enough during the Old Town Festival to create a huge production!

I hope everybody has a wonderful week!