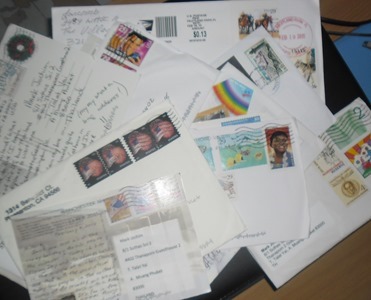 Following more than a month of working at a school on an small island just to the east of Phuket Town, I am finally able to pursue a few of my favorite free-time activities.  One of those is writing for this blog (which suffered greatly with student assessments and a week-long English camp at the end of the school term).  Another is, of course, working on my stamp collection..

Needless to say, I didn’t do a whole lot philatelic during February and March.  In one way, I was “lucky” that this was also a quiet period as far as Thailand Post new issues.  The first week-and-a-bit of February saw three new issues – single stamps marking the founding of Kasetsart University and Valentine’s Day and a pair for Chinese New Year.  The university stamp was also released in a special mini-sheet of four that was only available in a special folder.  I had to turn to eBay to obtain a copy of this, at a cost of just under 200 Thai baht.  At the end of March, a busier period commenced with the release of the annual Red Cross issue and has continued this week with stamps marking HRH Princess Maha Chakri Sirindhorn’s 60th birthday, the 200th anniversary of Pathumthani, and a set of eight for Thai Heritage Conservation Day.  Next up will be a block of four to be issues Tuesday marking the Songkran Festival, AKA Thai New Year, AKA the nationwide water battle.

I attempted to participate in this year’s A Month of Letters and managed to send several cards and letters before I began teaching on Siray Island.  I did receive a few letters towards the end of February (in a big bundle along with some Postcrossing cards and stamps purchased on eBay) and hope to have time to write replies in the very near future.  I’ll try again next year (perhaps pre-writing some of the letters during the New Year’s holiday!).

As far as eBay goes, my biggest pursuit in a great many years was a Penny Black.  This celebrated first-ever prepaid postage stamp released by Great Britain in May 1840 is considered a “must-have” for any serious collector of the classics.  Back in my peak stamp collecting years at the end of the 1990’s and early 2000’s, I owned two including one on-cover.  With those long-gone and s this year marks the 175th anniversary of the stamp, I really wanted to add one to my new collection.  Somewhere along the line I decided that just any Penny Black would not do – I needed one with my initials in the control letters.  These letters were added to many of the Victorian-era British stamps to denote their individual positions in the large press sheets.  I went after a Penny Black with the initials “MJ”. 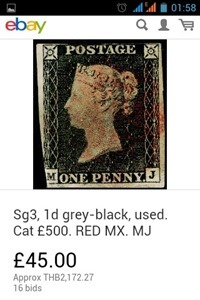 What I ended up with was a fairly nice copy of Great Britain #1 (by the Scott catalogue, which is what most Americans use; it’s listed as #3 in the Stanley Gibbons catalogue published in the UK due to it’s color shade of grey-black – SG #1 is a pure black shade) with a red Maltese cross cancellation.  It is somewhat cut into on the lower left margin but otherwise sound.  The final bid of £45 (about 2,200 baht) is more than I’ve paid for a single stamp in more than fifteen years but much less than it’s value of £500.  I don’t like to pay much more than 10 percent of catalogue for any stamps that I buy.  Inspired by this purchase, I’ve been bidding on other British line-engraved issues of the Victorian era.

Now that I have a bit of a holiday, I plan to spend a bit more time searching out items for my collections.  My favorite auctions to bid on are the mixed lots of all-different stamps from a particular country.  The per-stamp price often works out to between one and three cents and occasionally I obtain something with a much higher value in these packets.  But as long as there are few duplicates, I am happy to add each and every stamp into my stock books.  Recent eBay wins have included stamps from Allenstein, Quelimane, Bohemia and Moravia, Germany, Newfoundland, Sweden, the Straits Settlements, New Zealand, and Chulalongkorn-era Siam. 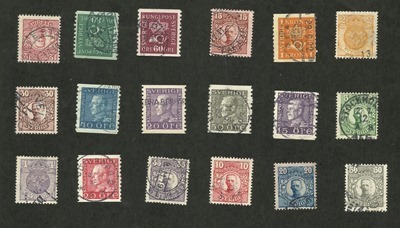 I also tried bidding on a few nineteenth-century U.S. issues, including the Columbian Exposition issues of 1892, but thus far have been unsuccessful at winning any.  However, I did win several U.S. first day covers bearing stamps with various New Mexico-related themes.

Definitely the biggest occurrence in my stamp-collecting endeavors has been my recent purchase of Liberty Street Software’s wonderful StampManage 2015 inventory program.  I’d been using the trial version and liked it enough that I decided to shell out the $80 to buy the full thing.  If you know me, you know it’s almost unheard of me to spend money on computer programs other than my Operating System (and sometimes not even those; I’m currently using the evaluation version of Microsoft’s Windows 10).  I plan to scan every philatelic item I own and eventually catalogue each of these in StampManage.  I will attempt to write a full review of the software in the near future so watch for that.