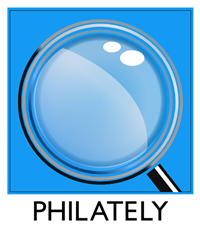 This past month has (probably) been my most philatelic of the past decade, possibly the past two decades.  The reason for my uncertainty is that any records of my pre-Thailand life are long gone and my memory isn’t that keen either.  While living in New Mexico, I did attend a few first day of issue ceremonies held within the state – the most memorable of which was a journey to Chama in the northern mountains when the ceremony for a set of train stamps was held aboard a narrow-gauge steam train! 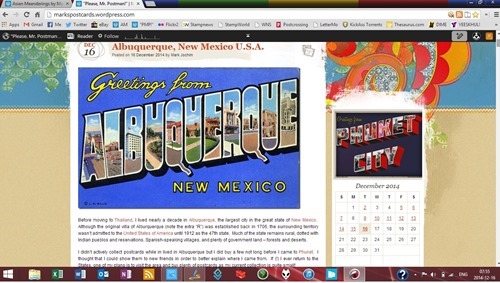 The most visible of my stamp-related activities this month are the many online articles I wrote for this blog and for a new one I started to highlight my postcards, “Please, Mr. Postman!”.  I looked at the history of Christmas stamps and spent twelve days publishing information on those released in 2014.  In the (near) future, I plan to write about some of the items in my various collections in a similar vein as I’m doing on the postcard blog. 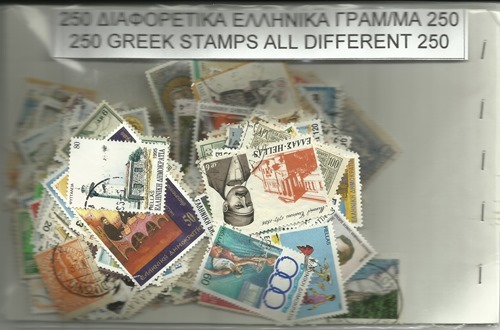 I added quite a few stamps to my various collections this December and started one new collection with a sisterly gift of 250 Greek stamps purchased in Athens.  Most of the stamps came via bids on eBay and I had a really wonderful visit to the local philatelic museum mid-month where I added mint singles and first day covers for most of Thailand’s 2014 issues for less than US $23.  This included several packets of philatelically-themed postcards and some really nice maximum cards. 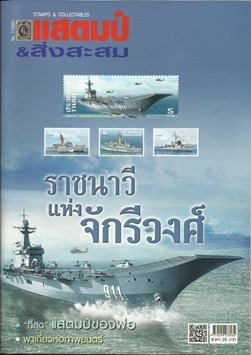 Also on the Thai collecting front, I received the new issue of The Journal of the Society for Thai Philately just a month following the previous one.  I also spotted a new issue of Thailand Post’s own philatelic magazine (written in the Thai language only but featuring beautiful stamp photography) a year after believing it had ceased publication.

At the beginning of the month, I joined my first online stamp collectors’ forum, Stamp Bears and have enjoyed participating in discussions and adding photos of my favorite stamps.  I’ve already amassed one hundred posts and even received a Christmas card from the board administrators.

Between the end of November and the middle of this month, I sent out eight Postcrossing postcards but have yet to receive a single one.  It’s a bit discouraging; when I rejoined in 2013 I had the same problem so requested that cards sent to me be mailed in an envelope.  I found I didn’t like unused cards as much as ones with the stamp and postmark on them so removed this stipulation from my profile.  The result is that more seem to go astray when on their way to me.  I was once told by a postal employee here that postcards weren’t deemed “important” mail which seems a bit illegal to me…

In other Postcrossing-related jibber-jabber, I was finally able to access my original account which I’d opened back in the summer of 2006 when the website was just two years old.  I’d changed emails and couldn’t remember the password.  It was nice to see my early activity – the very first card I sent was number TH-69 while the most recent was TH-186079.  I wrote to the administrators asking if there was some way to combine the statistics from both accounts before closing the most recent one.  Unfortunately, this wasn’t possible on the site itself (I made a spreadsheet for my own records); I’m waiting for my final sent cards to be registered before I close out the newer account.  Interestingly enough, the sent/received totals of each were almost identical. 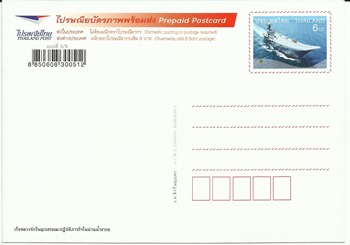 I purchased a few unused postcards throughout the month – the previously mentioned cards produced by Thailand Post, several Thai and Phuket tourist cards, and even a few online.  The latter include one from Antarctica and a couple from Pitcairn Islands.  I plan to put a US international rate stamp on the Antarctic card and sent it to one of the American research stations on the continent for a postmark and return. 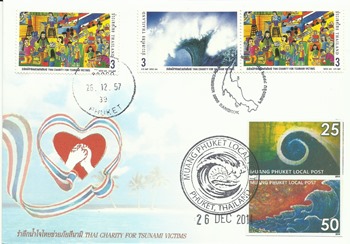 On the local post front, I designed and “released” what was only the second issue of Muang Phuket Local Post in 2014 – a pair of stamps marking the tenth anniversary of the tsunami that devastated the region on Boxing Day 2004.  I had planned to attend ceremonies in Bang Niang village in the Khao Lak region of Phang Nga Province but laziness and bad weather rooted me to Phuket.  I did make it to the main post office in Phuket Town for anniversary postmarks on the stamps Thailand issued in 2005 on the first anniversary.  The post-mistress gave me the handstamp and ink to cancel the covers myself.  I actually dislike this as I am certainly not a professional – the die on the Phuket postmark is metal and the tub of ink is very stiff and I can never get as sharp an impression as I’d like.  Thus, a few of the covers had an unreadable datestamp and others are okay but none are great.  I made a very limited number (ten) and will probably give them out as gifts, hanging onto one or two of the “okay” covers.

Speaking of the MPLP, I also have my first “real” handstamp of my own (the covers I created last year had the Muang Phuket Local Post cancellations applied by inkjet printer).  I ordered it through Simon’s Stamps in Massachusetts as the local rubber stamp-creating shops had all seemingly vanished.  Naturally, the day after ordering my stamp online I happened to see one while passing by on the bus.  I’ll stop by while during my New Year’s holiday to check on prices. 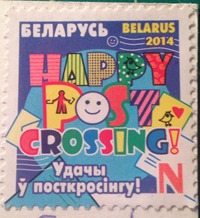 Stamps purchased via eBay that have yet to arrive include Christmas stamps from the Ukraine and Austria, a Postcrossing stamp from Belarus, and packets of all-different worldwide and British Commonwealth stamps.

Probably the best “philatelic” purchase I made this month, however, was a new scanner and printer setup which I’ve been using to scan postcards and stamps in my collections and also to print album pages, etc.

What philatelic pursuits will 2015 bring? 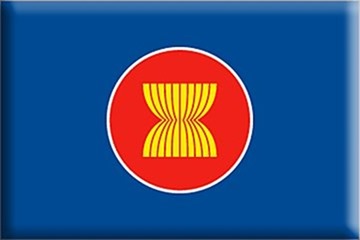 I’m already planning the next MPLP issue.  It will concern the ten member nations of the Association of South East Asian Nations (ASEAN) as 2015 is the first year of their Asian Economic Community (AEC) which is a bit like the European Community without the change in currency (mainly because Thailand refused to give up the baht).  ASEAN awareness is heavily promoted in the region, particularly amongst school children, and has seen numerous stamps issued relating to it (hey, another collecting “specialty” for me?).  I’m considering doing separate releases each month portraying either a different member nation’s flag, map, or coat of arms (or all three!).  The eleventh month would feature the ASEAN flag which I think is rather striking. 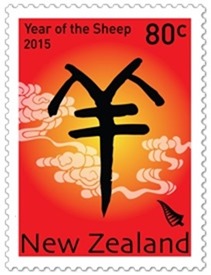 I had considered issuing local post stamps for Chinese New Year (which begins on 19 February 2015) but couldn’t decide if I should call it Year of the Goat, the Sheep, or the Ram.  There doesn’t seem to be a clear consensus on this…

I’m also planning to join at least two additional philatelic societies – one for collectors of Pitcairn Islands and the other for Christmas stamp collectors.  I’d join more but most are rather expensive due to the high cost of shipping the journals to Thailand (I really like the organizations that offer a reduced-rate PDF-download option). 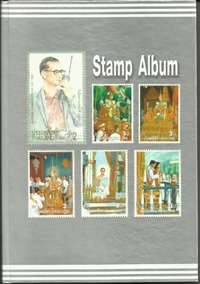 Collecting supplies have been a big problem.  For my postcards, I use photo albums with bound-in pocket sleeves.  However, I have nothing in which to store my many oversized cards and covers.  There are “stamp albums” sold in the local bookshop which are small format stock books but who knows if the rows of slips holding my stamps are archival quality or not?  These are only temporary solutions and I spend a lot of time online trying to find stamp mounts and albums that I can have shipped economically.  Even trying to find a decent binder (preferably with a slipcase) in which I can put my own printed page into is a difficult process as three-ring binders are rather rare (most have two closely-spaced D-rings which is not good for anything).

There are supposedly a few stamp shops remaining in Bangkok so I’m thinking about going to the capital on my next holiday trip (in mid-April) rather than visiting a “new” country.  I would then search out these shops and see what sorts of supplies (and other goodies) they hold.  Bonus points if the proprietors can speak English as perhaps I can set up a mail-order system whenever I need something they stock.

I hope 2014 was as philatelically fulfilling for you as mine and that 2015 is even grander!  Happy New Year!