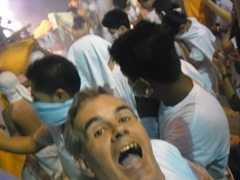 The 2013 Phuket Vegetarian Festival ended with a bang (many, many, many bangs) this past Sunday night.  Well, I should say, it lasted until the wee hours of Monday morning.  I’d met up with friends Jade and Lily, plus their Thai boyfriends, around 7pm at Surin Circle.  It was their first time to experience the madness of the finale when all of the Chinese shrines have processions in order to send the Emperor Gods back to heaven.  Basically, it’s hours and hours of spectators throwing fireworks at each other and any passing traffic before the actual mahsong ever appear.  And when they do, all hell breaks loose and you feel like you’re pinned down during a Syrian battle and spend most of your time dodging “in-coming” while attempting to take non-blurry photos.  My friends left after the first real onslaught (around 11:30) but the best was yet to come… 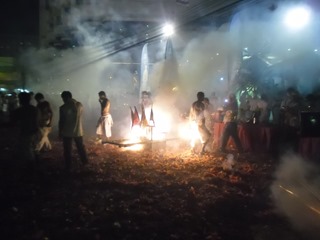 This year, the authorities have made an ordinance against “the misuse of fireworks” which is supposed to garner a 1000-baht fine.  I thought that that fact would deter many of the people from targeting each other but I saw many families gleefully throwing explosives at pedestrians and traffic.  One father and son sitting near us kept aiming for the laps of motorbike drivers and passengers.  At one point, they each scored a direct hit on a group of teens riding two motorbikes.  The angry passengers jumped off the bikes and looked like they were going to start a fight.  All of this time, there wasn’t a single police officer to be found.  However, about an hour later, a number of plain-clothed officers walked up the street and our group pointed out several of the worse offenders.  The cops then proceeded to search bags and began confiscating some of the worst of the explosives (and found some drugs as well!).  I later learned that about 30 people were arrested; the police were only around for about an hour in total, however, or the number of arrested would have been much higher!

Jade and company were mightily impressed when the first of the processions arrived from, I think, Bang Neow Shrine.  We’d moved over to Phuket Road just in time to catch them coming towards us.  It was intense but not at the level that I knew it would become.  Still, it was nice to enjoy my favorite part of the festival with first-timers – screaming our heads off in jubilant terror! 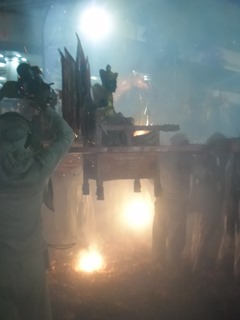 When the shrine bearers looped around the circle and headed southward on the road going past the Metropole Hotel, we ran over and took up positions in front of Club T2,  It always seems that the explosions are much more intense there and this year was no different.  I particularly like the long poles with the strings of fireworks at the end.  The yielders can position the fireworks right in the center of the shrines, creating some really spectacular explosions.  As the night wears on, I become bolder in how close I get.  But it never seems to be close enough as the “photojournalists” tend to rule the roost – clad in what can only be described as white battle-gear, complete with giant ear-protectors and huge lenses.  I always think it’s rude of them, armed as they are with lenses that they can use from dozens of yards away, to shove everybody else out of the way for a clear shot.  The Thais are polite to a degree, but the farang just don’t care and make it very dangerous.  It’s hard enough to take a photo during the “firefight” conditions, never mind if the subject is in-frame or in-focus, without having to contend with these selfish camera-jockeys! Indeed, many of my clearest shots ended up being the back of some “photojournalist” who jumped in front of me at the last moment.  I wonder if they do that with soldiers when they are imbedded in places like Damascus or Baghdad… 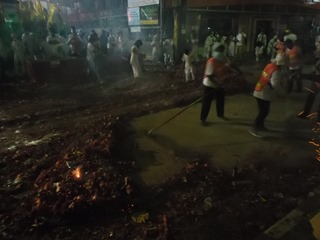 At any rate, there was a lull in processions around 11:30 which gave some of the street-sweepers a chance to clear some of the debris.  The spent firework paper covers the streets quickly and smolders, occasionally flaming up or even exploding.  I’m always impressed by how quickly Phuket’s street cleaners take action at these types of events!  By the following day, the only reminder are a few stray pieces of red paper.  Even the trash bins are emptied of the huge amount of boxes that the fireworks come in.  My friends took this opportunity to head for home (they live on Cape Panwa and so had quite a perilous journey ahead of them!). 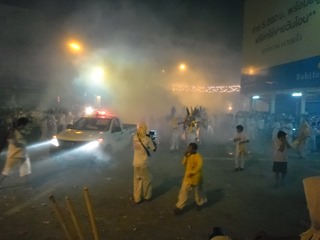 I always like to stay until the very end, partly because I’m a glutton for punishment and partly because the streets are so clogged that it’s impossible to get back to my home until the processions have ended.  Part of the price I pay for living in Phuket Town but I absolutely love it!  I headed to a position just to the north of the island in the middle of Surin Circle and awaited the inevitable fiery processions.  They began in earnest just before midnight with the arrival of a huge bank of bright lights carried on a flatbed truck.  These are so that the processions can find their way through the nearly impenetrable curtain of smoke covering the road.  Soon, one could pick out the headlights of a police car followed by a group of faithful.  Explosions filled the air and the ground.  But what is most notable are the sounds – constant booms from the fireworks and drums as well!  This never let up until after one in the morning.  The photos simply can’t reproduce this aspect of the festival so I shot quite a bit of video.  (I’m still sorting the video out and, hopefully, will start uploading to my Flickr account sometime soon; perhaps I’ll try to put a few on YouTube as well but the upload speed here is very slow and I have better success with Flickr.) 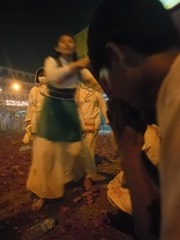 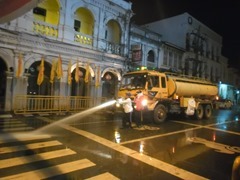 I began making my way home a little after one a.m., slow going as there were some stragglers from the processions and many were stopping at the shrines set up along Phuket Road.  There were also many flaming piles of paper to dodge; my shoe actually got fire one year!  As usual after events such as this, I never really want it to end and going back to normalcy is not something I really want to do.  Along the way, I was impressed by the street-cleaning crews once again (they start north and head towards the south).  Just outside of the Thepkasatri Building (old Royal Thai Police building) and Standard Chartered Bank (now a museum celebrating the Peranakan culture), there was a large garbage truck followed by a water truck.  Beyond them, the road was absolutely spotless.  Well done, Phuket Municipality!

In all, I took almost 700 photos (and 74 video clips) during the six hours I spent at the Grand Finale.  For the album below, I’ve edited that down to about 300 photos (videos will be on Flickr at a later date).  There are still quite a few blurry photos in there, but I chose pictures based on what they conveyed rather than for photographic quality.  I never doctor these with photo-editing software – they are as raw as I shot them.  I do hope you enjoy them, and get some sense of the “experience” that I had in my six hours under fire!

One thought on “VegFest 2013: The Grand Finale”