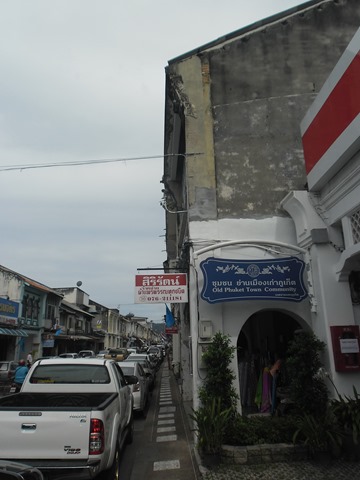 It’s been a while since I’ve walked through Phuket’s Old Town area during the daytime while having my camera along.  It’s even rarer for me to go into “tourist mode” and shoot photos of things I see almost every day.  But I was in the mood to do so this morning while on my way to catch a bus in the fresh market area on Ranong Road.

I’ve taken so many photos along Thalang Road over the years that it can be a challenge to find something “new”.  My biggest problem, I think, is that I am rather shy and very conscious of blocking traffic or other pedestrians while I try to focus a shot.  That’s why so many of my pictures tend to look like snapshots rather than carefully-composed works of art.  I often don’t get close enough to the subjects and many turn out blurry.  As a result, I’m usually not satisfied with the majority of my photos.  I have so much to work on!

That being said, I also rarely try to “fix” my photos after I shoot them.  I may add meta-data tags but I’m too inept at Photoshop or easier-to-learn editing programs to spend any time with them.  I don’t even crop them which is something that would easily improve my “composition”.  I want to change that, too! 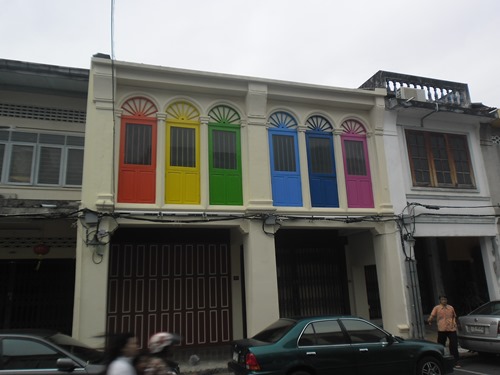 I really love the different colored window surrrounds on this building’s second story.  The photo I took last week during the nightly light show is one of my favorites and something I wouldn’t mind turning into a postcard… 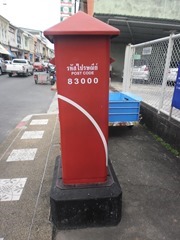 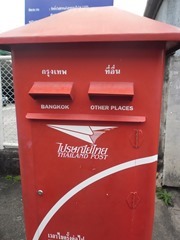 I’ve always loved old pillar boxes and that has morphed into an interest in photographing the different styles of post boxes that I’ve seen on my travels throughout Asia.  Most of the ones on Phuket are similar to this style, in the red-and-white of Thailand Post.  I often confused with the choice of slots.  It doesn’t seem right to put Phuket-bound mail into the one marked “Other Places” and it doesn’t make sense for it to go to Bangkok first… 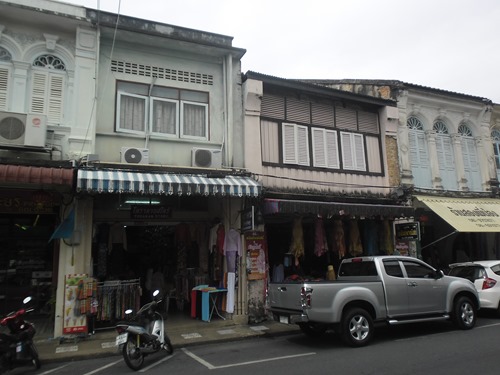 There are many traditional cloth and silk shops along Thalang Road.  Many have been owned by Muslim and Chinese families for generations.  There are also a couple of great roti shops. 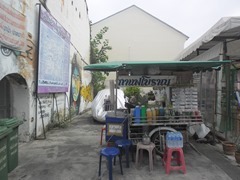 But the best food (not to mention the least expensive) can usually be found from mobile street stalls such as this one.  While there are only a couple along Thalang Road on a daily basis, that changes during many of the popular local festivals.  My favorite is the Old Town Festival when most of the streets through the area are given over to food and souvenir stands and vehicles aren’t allowed. 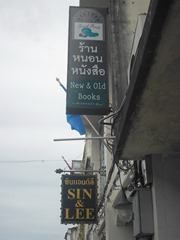 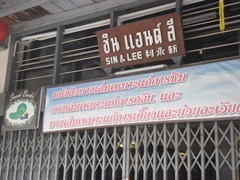 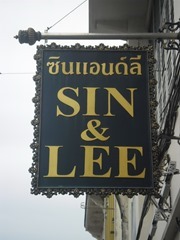 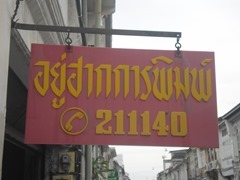 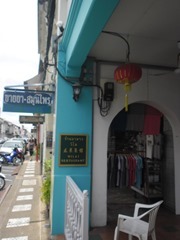 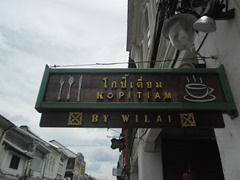 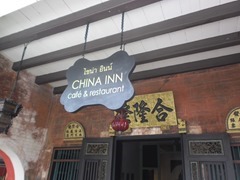 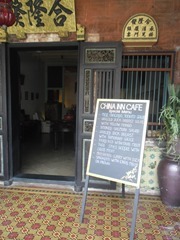 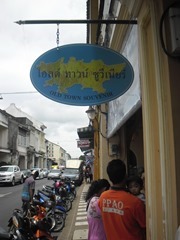 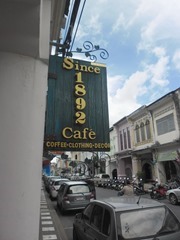 One of my favorite objects to take photos of are the many interesting shop signs.  Sin & Lee was Phuket’s first grocery store when the family (who still owns it) began bringing in difficult-to-find items by steamer from Bangkok and Penang.  Another long-established business still operated by the original family is Wilai Restaurant which has recently undergone a bit of a remodeling.  Next door is Phuket’s oldest Chinese herb shop and then the relatively-new Kopitiam, both of which are owned by the same family.  The latter is my favorite place to eat in the entire Old Town area, perhaps in all of Phuket! 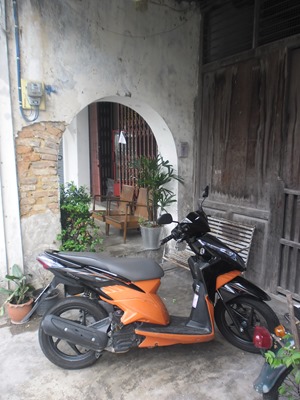 I also enjoy trying to get decent photos of the famous five-foot ways, many of which have only recently been opened back up after years of being blocked (bricked-over in most cases).  There have been many such preservationist moves in recent years in an effort to entice increased amounts of tourists to the streets of Old Town.  The burying of the tangles of cables along the streets is another of these.  Perhaps with just a little more work at promoting the local heritage, Phuket will attained it’s long-desired World Heritage status after all. 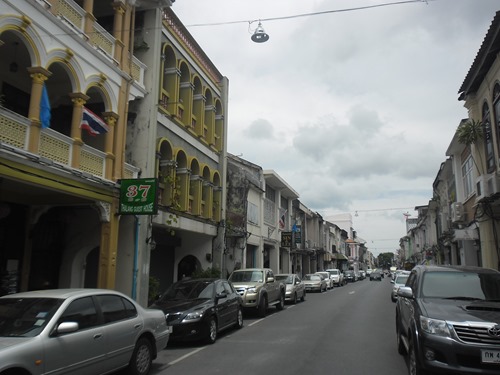 There are also plenty of interesting guesthouses along Thalang Road.  I stayed at 37 Thalang Guest House for a week or so when I was looking for an apartment two years ago, fulfilling my dream of living in the Old Town area. 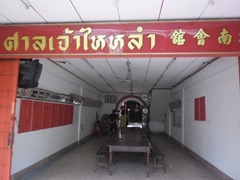 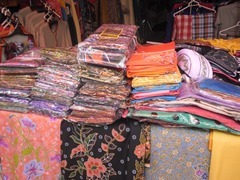 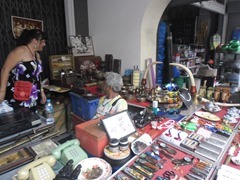 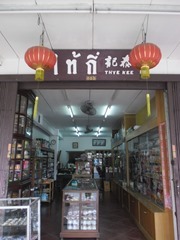 I’m becoming braver at poking my head into shops and other places and asking to take photos.  You never know what you may find! 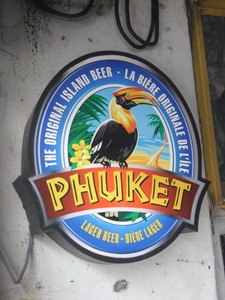 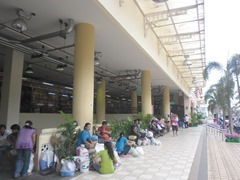 I finally arrived at the fresh market on Ranong Road.  I’ll be here quite often in the next couple of weeks during the Por Tor Festival (which starts tomorrow, by the way) but I took the change to pop up to the rooftop parking area this morning before seeking out my bus.  I’d recently read about the garage and realized that it might be a good platform for some “aerial photography” of local street life.  You be the judge: 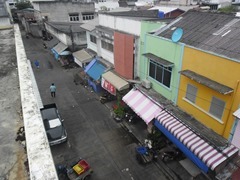 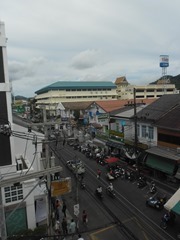 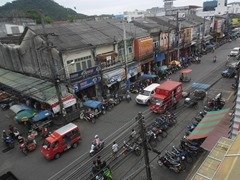 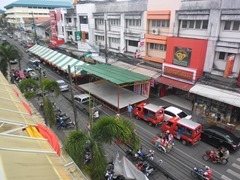 With the morning starting to get away from me, it was time to seek out my bus.  Well, a songthaew, actually.  You will have to wait for the next post to find out where I was going…

Additional photos taken this morning and afternoon (on my way back home) can be seen in the photo album below: